‘Seeing high-profile people on the list – this was a big breakthrough.’

EFSJ talks to Hristio Boytchev about the investigation that clinched the top prize at the 2021 European Science Journalism Awards.

It wasn’t exactly a leap of faith, but Germany-based journalist Hristio Boytchev had to wait more than three years to discover that his investigation was on to something big.

The fruits of that labour came in the summer of 2020. A year later, two of the reports documenting the extensive investigation he led into conflicts of interest in science and medicine won the top prize of the European Science Journalist of the Year 2021 (ESJotY) award, announced last September by the European Federation for Science Journalism (EFSJ). 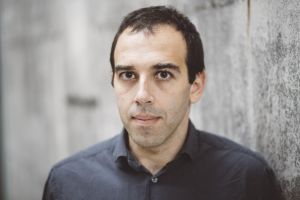 The work was funded by an Innovation Grant from MIZ Babelsberg, the Prototype Fund of the Open Knowledge Foundation Germany, the IJ4EU, and the Grow Stipendium of Netzwerk Recherche.

In this conversation with Anita Makri, chair of the 2021 awards judging panel, Boytchev describes what it took to keep the investigation going, how the team made sure they had a winning story in their hands, and what aspiring investigative journalists should keep in mind to pursue data-driven stories that make an impact.

Anita Makri: What are your investigations about, briefly?

Hristio Boytchev: One of them was about allegations of misconduct which led to an investigation by Max Planck Society. The other investigation is about conflicts of interest and science. Basically, we created a large database of so-called conflicts of interest statements [in] scientific articles – [where] scientists state if they think they have conflicts of interest, meaning that they are receiving funds that could influence them on the topic they’re researching. We analysed millions of these statements to find trends, and also to find possibly authors that are not always fully disclosing these financial ties.

AM: How did the idea came up – how did you start working on this?

HB: We first developed this idea at a hackathon for data journalists. At the time, I was an editor at CORRECTIV, which is an investigative nonprofit newsroom in Germany. We were investigating conflicts of interest but coming [at it] from another side, from disclosures by pharmaceutical companies. They publish which medical professional has received how much money from which company. It’s voluntary, so only [some] of the doctors participate. But at this hackathon we were thinking okay, what about other data sources for financial ties in science and medicine? So the idea arose to actually do the database of this, and then cross-match with the data that we had. We wrote a prototype in two days, analysing one journal as a proof of concept. We pitched [the idea] with our editors at the time but it wasn’t pursued. After I became a freelancer again we thought okay, we can maybe now try to develop this as a project and apply for funding.

It was a huge effort and it took a long time. We applied for [the] first prototype fund in autumn of 2017. We got it in the winter, and so we officially started work in the beginning of 2018. And we published an investigation at the end of 2020. It was a very long time. And it was a huge relief, actually, when we published.

AM: It was also a large database – something like 15 million conflicts of interest that you had to analyse for one of the investigations?

HB: Yes, it’s huge. And then you always have problems to solve. Because the data isn’t perfect, right? And also, this deduplication of authors – you know, can you be sure that two people with a very similar sounding name are the same person or not? Where [do] we make the cut-off? A lot of things had to be double checked. In this main investigation, we actually singled out five researchers for allegedly not disclosing all their financial ties. Then it becomes something very concrete. You have to be very sure about what you’re talking about. We make some pretty strong allegations.

“You have to be very sure about what you’re talking about. We make some pretty strong allegations.”

AM: What supporting evidence did you look for once you knew you were on to something

HB: We had an algorithm, an approach to identify high-profile researchers. We wanted people that publish a lot, and may [have] discrepancies in financial ties. There was a ranking – so [we] came up with a list of names. And then, [asking] does the trend hold up? I was searching for additional papers and seeing what they’re disclosing, and other sources of data for these people. For example, data that pharmaceutical companies publish, or maybe people speaking at industry symposia, where we know that they’re getting paid pretty highly – that’s for sure a financial tie. Everything was double checked by hand. And then, of course, we actually approached the people and sent them an Excel file of our findings, so they have the ability to go through them and tell us where [we had] a mistake. This was the last step.

AM: What reactions did you get at that stage?

HB: The reactions were different, and they’re written in the main investigation piece. Most of them, at least at the beginning of the conversation, were quite confident that they had done nothing wrong – that these are not relevant conflicts of interest, and that’s why they haven’t discussed them. One of them changed their perspective during the conversation. Also this person said that, in the future, they will approach this differently. Which is quite nice.

AM: What else came your way after publication?

HB: First of all, we had a very strong response on social media from colleagues that was very positive. And then through a follow-up piece, we actually reached out to different associations, policymakers and professional societies, and asked them [about] their stance on the issue. It’s a reaction piece. Some people complimented [our] approach, and some of the associations said yes, this is a very serious problem, we should do something about this.

AM: Have you followed up since then, to see if there has been any change in rules or policy?

HB: We’re still investigating this – we’re working on a follow-up project right now. But to my knowledge, the rules haven’t significantly changed. I think that with investigations like these we’re raising awareness of this issue. Right now, a lot of responsibility lies with the individual, the scientist, for example, to disclose – and this was one of the main problems in the system. People are being asked to disclose what they think is a relevant conflict of interest statement. And the individual sometimes thinks it’s not relevant, the conflict. Therefore, they don’t disclose it. But investigations like this raise awareness that maybe they should disclose.

AM: What would you say was the toughest part of doing this work?

HB: Seeing if the algorithm will produce results. For a long time, we didn’t know what will come out. We believed in this approach, and were feeding data, but we weren’t sure that it will produce relevant results. Journalistically relevant: you want high-profile people, protagonists on which to build a story. Seeing all these high-profile people on the list – this was a big breakthrough.

And the other [tough part] was actually the investigation of these people. A role model for this investigation is [a] New York Times – ProPublica piece on researcher Jose Baselga, a high-profile cancer researcher who had many financial ties with industry. What ProPublica and New York Times did is show that he’s not always disclosing those ties. And it was a big story, front-page news. We decided to do it with five high-profile people working in different areas. And then it got very complex. Because you have to decide, ‘is this really relevant’? If I have a tie, for example, to a certain company, what drugs does this company produce? Are these drugs mentioned in the piece? And then, taking these Excel sheets and saying, okay, in our opinion in these cases you didn’t disclose these financial ties; compiling these sheets, sending them out, then having these conversations with five people, not only one person. This was very challenging.

AM: How long did you have to wait to find out if you had results?

HB: That’s the thing: we’ve been working on this with external funding since [the] beginning of 2018, and in the summer of 2020 it produced results.

AM: It seems quite extraordinary to go for three years on the belief that you’re actually on to something – what kept you going, what gave you that confidence to keep searching?

HB: It is known that disclosures are incomplete. Basically if there’s a problem with disclosures, with sufficient data, we’ll find examples. But yes, as you say, for a long time you had to just have the belief that it will work. We would have published the project in a different way, had we [not] found these people. So certainly, it’s not an all-or-nothing endeavour.

“It was very long term. You have to be prepared for that.”

AM: What would you say to other journalists interested in pursuing a similar investigative story – what advice would you give?

HB: For a project like this – I mean, it was very long term. You have to be prepared for that. It took longer than we thought it would take, which is something quite typical in data-driven investigative stories. You always encounter problems that you didn’t expect. It’s also about teamwork. I work with great data journalists that were just very motivated. They understood the stories. I’m a journalist, but here I had to shift into the role of project manager – motivating people, keeping on top of deadlines. That was a whole other challenge for me. Something I’ve learned [is that] if you actually find something that the data journalist is interested in, this is really half the trick. Because then they’re just going to be very motivated. Together you find something that everybody is interested in.

AM: Is there any sort of training that you recommend people should have before they embark on a similar investigation?

HB: I think you need support. I had great support from the founders, but also from BuzzFeed. Then, of course, you need legal advice, for sure. That is super important, especially if you’re a freelancer.

I think in Europe, if you have good ideas, there are networks where you can get support, where you can also discuss your ideas. There is, for example, this conference about data driven investigative journalism [Data Harvest]. I try to go there often. You learn your tools, you get inspired by what you can do, you can connect with people. And in different countries there’s funding for innovative journalism projects.

The interview was edited for brevity and clarity.

This year’s European Conference on Science Journalism will focus on investigating science – register for ECSJ2022 taking place in Leiden, July 10-13!

The meeting is organised by the Dutch professional association of science journalists and communicators (VWN), with support from the European Federation for Science Journalism (EFSJ).