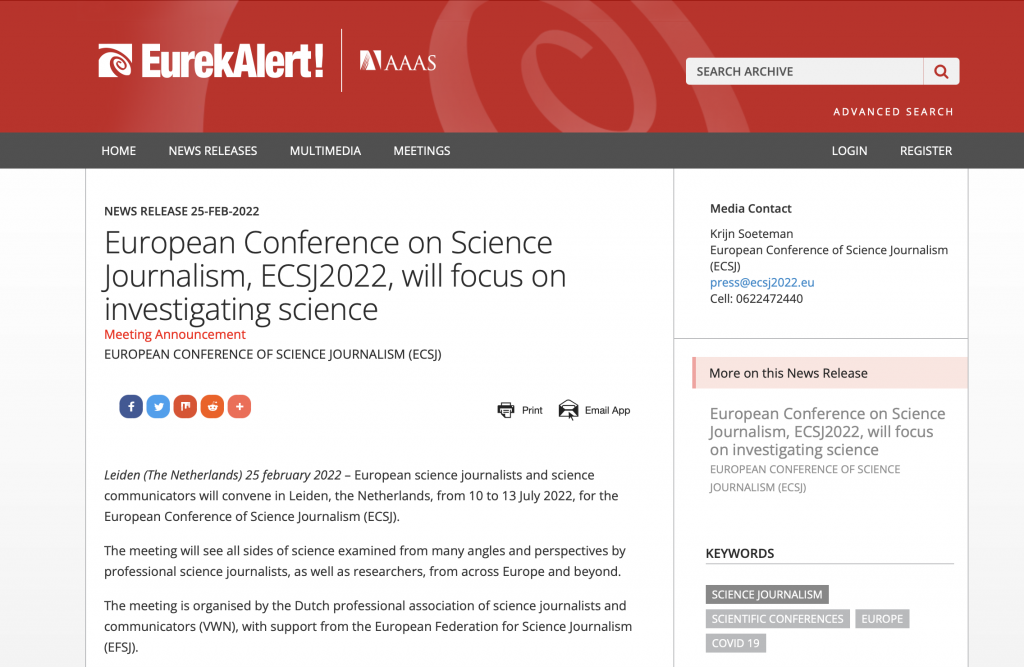 Leiden (The Netherlands) 25 february 2022 – European science journalists and science communicators will convene in Leiden, the Netherlands, from 10 to 13 July 2022, for the European Conference of Science Journalism (ECSJ).

The meeting will see all sides of science examined from many angles and perspectives by professional science journalists, as well as researchers, from across Europe and beyond.

The meeting is organised by the Dutch professional association of science journalists and communicators (VWN), with support from the European Federation for Science Journalism (EFSJ).

It will take place right before the ESOF2022 conference, the biggest continental event of science in society, planned for 13 to 16 July at the same location.

“In an era when “just follow the science” has become a matter of fierce political debate, conspiracy theories and even riots in the streets, science journalism needs to rethink its position in the complex force field between following and investigating science,” said Krijn Soeteman, president of the Dutch association, and of the European Federation for Science Journalism.

The first keynote speaker announced is Dutch microbiologist and scientific integrity consultant Elisabeth Bik, who has pioneered a ‘forensic’ approach to quality control of scientific reports, by painstakingly checking images, mainly in biomedical publications, flagging and reporting frauds and manipulation.

“Her criticism of high-profile researchers like Didier Raoult – who claimed hydroxychloroquine cured covid-19 – has made her the target of lawsuit threats and vicious personal attacks on social media. However, she has no intention of backing down in her quest to improve science integrity,” said Arnout Jaspers, who chairs the programme committee of ECSJ2022.

“We are looking forward to hearing from her in person, and to discuss ways to report on the flaws of bad or careless science for the sake of science, and society”.

The program is being built around critical questions crucial for the scientific enterprise, such as “Is peer-review as reliable as it purportedly has ever been?”; “Is science immune to group think?”; “To what extent is science recruited as a scapegoat for political agendas?”

Confirmed events include a workshop on how science journalists handled the corona pandemic, with speakers including Science magazine’s Kai Kupferschmidt, and other prominent reporters from this particular front line, and a workshop on inclusive science.

Bellingcat, the online investigators collective, will host a special workshop tailor-made for science journalists, who will be encouraged to stand up and engage. Updates on the program will be made available through the conference website (https://ecsj2022.eu), where it is already possible to register.

The conference will take place in the Kamerlingh Onnes Gebouw (KOG), a building rich in science history: superconductivity was discovered here, and helium was liquified here for the first time (possibly in the entire universe). Many giants of early 20th century physics, like Albert Einstein, Niels Bohr and Erwin Schrödinger were guest lecturers at this institute.

Participants can enlist for a variety of field trips taking place before the ECSJ conference, on 10 and 11 July. These range from canoeing through the Leiden canals to clean up plastic waste, to visiting a nuclear reactor in Belgium.

EurekAlert! and Elsevier are among the first supporters of the ECSJ2022 conference.