EFSJ Board statement on the war on Ukraine 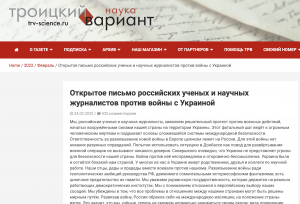 The board of the European Federation for Science Journalism (EFSJ) wholeheartedly endorses an open letter by Russian scientists and science journalists against the war in Ukraine.

The letter, published on February 24 and still collecting signatures, voices strong protest against the hostilities of Russian armed forces and its impact both on loss of human lives and the foundations of international security.

Consistent with the EFSJ’s mission to support science journalism and cooperation in Europe, the board condemns this war and calls for a peaceful resolution to relations between the two countries.

Read excerpts of the letter in English  on EU Reporter.