Since its inception in 2017 during the World Conference of Science Journalists (WCSJ) in San Francisco, the EFSJ has grown to seven connected European associations for science journalism. It now represents nearly 2000 science journalists who work for some of the most reputable outlets across the continent. 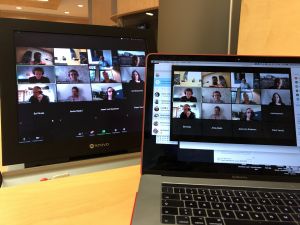 The federation’s first General Assembly was held in Lausanne, Switzerland, on the 11th WCSJ in 2019, where the first governing board was elected by the seven member associations from France, Germany, Italy, the Netherlands, Switzerland, the Russian Federation and the United Kingdom.

At this second Annual Meeting the president of the federation, Krijn Soeteman, underlined the progress that has been made over the last two years in building an organisation to represent and support European science journalism in its diversity. He noted that EFSJ successfully co-organised the European conference of science journalists with its Italian member, SWIM, despite the difficulties posed by the pandemic.

Soeteman also highlighted the EFSJ Climate Investigation Grant and the European Science Journalist of the Year Award, both awarded during the conference. The Climate Grant, sponsored by the BNP Paribas Foundation, awarded 12,000 euros to three projects of which one will also have the opportunity to attend a hands-on workshop provided by Centre de Formation des Journalistes Paris as part of the award. Maria Pazi from Russia won the European Science Journalist of the Year Award, a collaboration with the Association of British Science Writers.

The meeting progressed with suggestions for next steps in the process of further developing the young federation. This included a proposal from the German association, WPK, to organise a second meeting this year during the Science Journalism in the Digital Age conference due to take place in November in Freiburg, Germany.